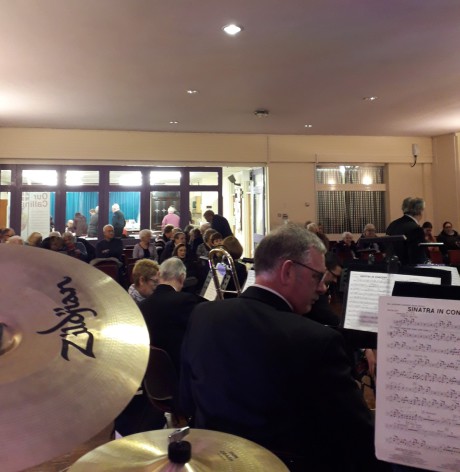 What a great concert this was! The venue, despite its size, had great acoustics and the audience were superb. Lots of clapping, singing and waving to many great tunes from Elvis,  the Beach Boys and Stevie Wonder to Queen, the Carpenters and Coldplay. A really great evening for everyone involved.

When VE Day dawns on 8th May 2020, it will be 75 years since the guns fell silent at the end of the war in Europe.

As part of the celebrarions for VE 75, the band will be taking part in the festivities planned within Acrrington town centre on 10th May 2020.  The whole event will last from 11am-5pm but specific times for our concert have not yet been confirmed.

Watch this space for more information on what promises to be a great day for all.

Rock/Pop and Festivities at Habergham! 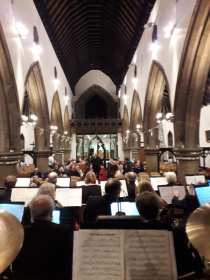 All Saints' Church is a beautiful church blessed with incredible acoustics.  Not surprisingly, it's the perfect venue for an evening of music, regardless of style or genre.

The band played a mixture of rock and pop themes, including medleys from the Beach Boys, The Carpenters and Elvis) followed by some fantastic Christmas tunes - some of the traditional classics of course, but also, one or two having a modern contemporary feel  (such as 'Calypso Christmas') to keep things nicely balanced. The church organist provided some additional tunes to the delight of all present. A concert to remember. 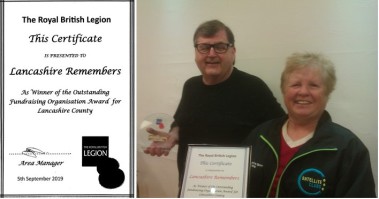 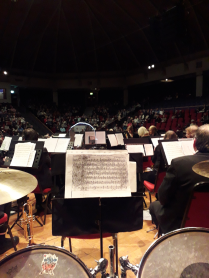 The concert was recorded by BBC Radio Lancashire and featured in a special commemorative programme that was broadcast shortly after the event.

Receiving the award is Anne Ellwood (Chair of the Organising Committee) and Nick Holme (ELCB).

Everyone enjoyed a great evening under the stars at Hollowforth Hall near Preston on 6th July. A fabulous concert with solo performances from our vocalist and solo bagpiper. Fireworks spectacular to finish! 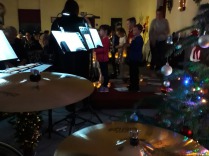 We all got into the Christmas spirit at this wonderful church. It was a great evening of singing and music.

A family event with lots of fun and great memories.  The children holding their lanterns whilst singing carols was a special moment for everyone. 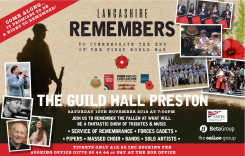 What a fabulous and moving event this was.  To honour our heroes in a Festival of Remembrance at the Preston Guildhall was such a privilege and an event that is ever likely to be surpassed.

The event was streamed live and hosted by Sally Naden from BBC Radio Lancashire, with edited highlights being transmitted Sunday 11th November. Members of the University of Central Lancashire (UCLAN) media team captured and mixed the live event on video.

The video can be found on You Tube, but the link will also be added to our site shortly in this section.

Some of the sounds and photographs from the day can be found within the 'Sound and image gallery' section of our website under the 'BBC TV and Radio Events' section. 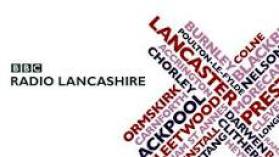 The band was honoured to have been asked by BBC Radio Lancashire to support  a live music event in support of a very special occasion.

BBC Radio Lancashire broadcast a live performance from their own Radio Theatre in Blackburn during the afternoon of the August Bank Holiday Monday in support of one their presenters who had been diagnosed with cancer.  Joining the band in the BBC Radio Lancashire Theatre for the live broadcast were a number of well-known artists: actor/singer/comedian Bernard Wrigley (Emmerdale, Coronation Street, Dinnerladies), guitarist Ken Nicol, Del Mundo and the Houghton Weavers.

This was a very special event for someone who has brought his own style of happiness to many people throughout Lancashire. All the performers and presenters had a great afternoon of live music and laughter.

One of the numbers we played at the Radio Theatre, the theme from 'Rocky'  was recorded and you can listen to this in the 'Sound and Image Gallery' section of our website. 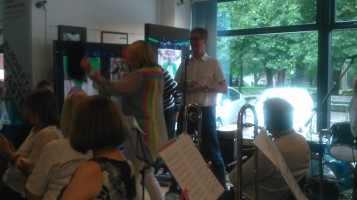 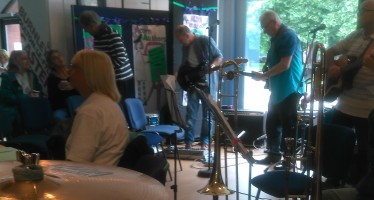 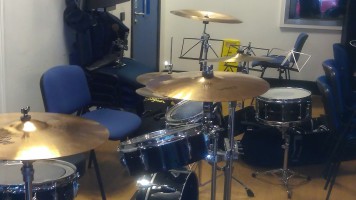 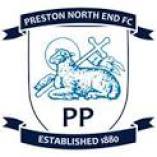 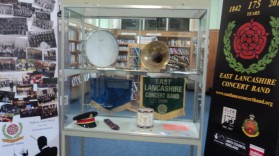 The collection was presented to the library following earlier displays at the Hyndburn Heritage Centre and, as part of "Amazing Accrington", at the Howarth Art Gallery.

The band was founded in 1842 as Accrington Old Band and led the parade of the Pals Battalion in September 1914.

The exhibition will remain in the library  until the 16th November so there is plenty of time to come and look at the exhibition.

Our evening of music supporting an award-winning play 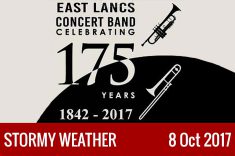 The band were pleased to collborate with Blackburn on Drama Club  during October in the Thwaites Empire Theatre.

The play had enjoyed a successful tour across the country, but finally came home to the Thwaites Empire Theatre, Ewood. Along the way the Drama Club collected no fewer than 9 Festival Trophies, ranging from Best Male Actor to Audience’s Choice, with extremely appreciative responses from all the audiences.

During the first half of the performance, the band played music from famous composers such as Gershwin and Benny Goodman, and from popular shows from the era such as The Desert Song and New Moon. This set the mood for the evening and led perfectly into the curtain music for the play – Cole Porter’s 'Night and Day.'

We're very pleased that an article covering the band's remarkable history appears in the June edition of this popular and vibrant regional magazine.

Check  out the article by clicking on the 'History of the Band' tab and following the link to the article.

Last Night of the Proms at Hollowforth Hall

We were honoured to be asked to provide the music for a 'last night of the proms' event in the grounds of this magnificent Grade II listed building near Preston on Saturday 15th July. The event was a mixture of light, entertaining music followed by a spectacular proms-style finish, including fireworks!